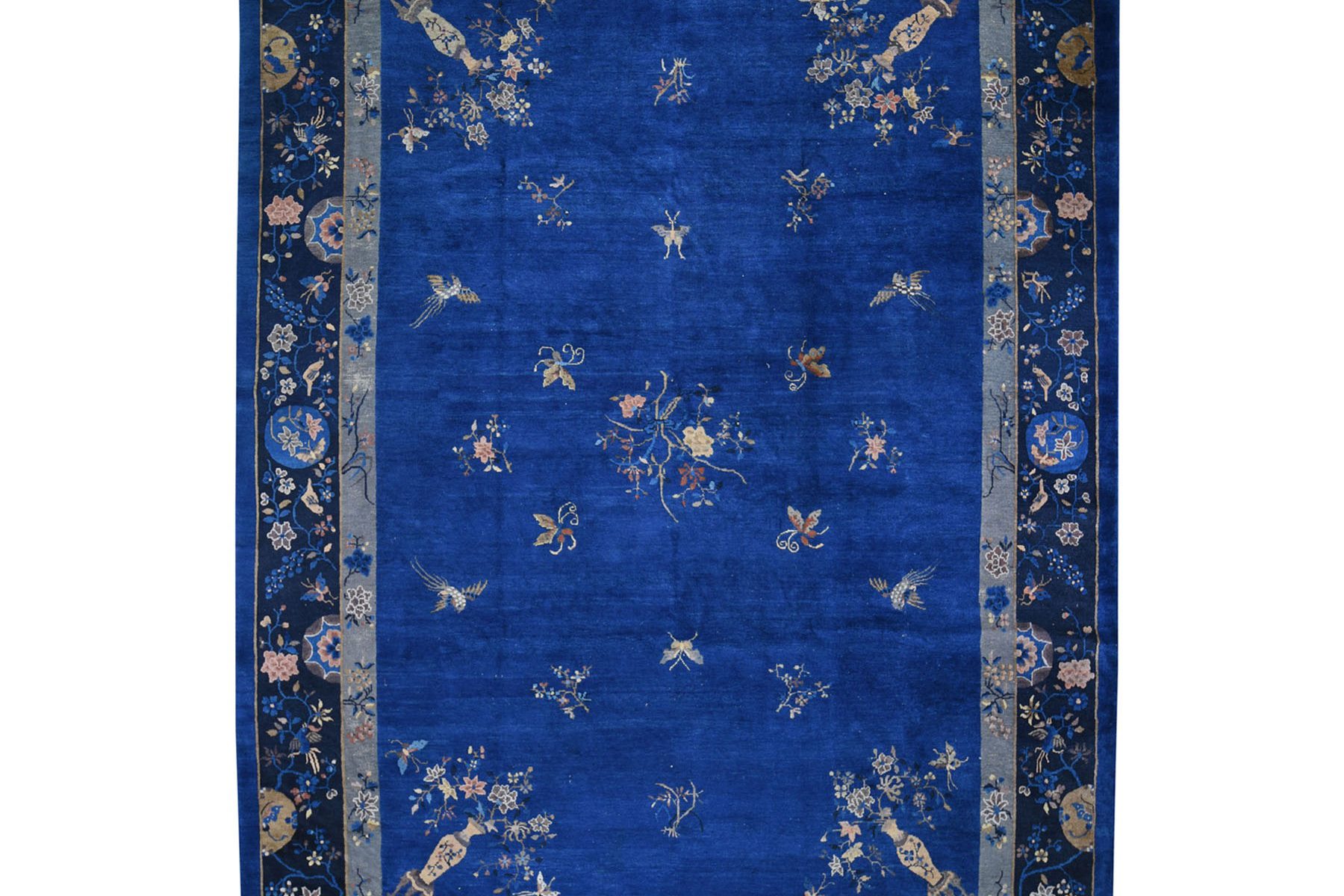 It’s hard to imagine life without Netflix binges and cheap air travel, both of which allow people to easily experience other cultures, but how did normal people get similar experiences in centuries before TV and cheap travel? Trade is the answer, and the farther away the country was from Europe and the US, the more “exotic” and desired the trade items. One of the most popular “exotic” motifs was – and still is – the fanciful figurative patterning called “Chinoiserie” from China and Japan. In the early modern history of trade few westerners would ever be able to visit the far east, so objects like folding screens, ceramics, and textiles were eagerly collected. Some of the most innovative Chinoiserie designs that merged the best of the west with the best of the east, eventually developed into an early 20thcentury China-based international rug company that produced the designs we now know as “Nichols Rugs”. 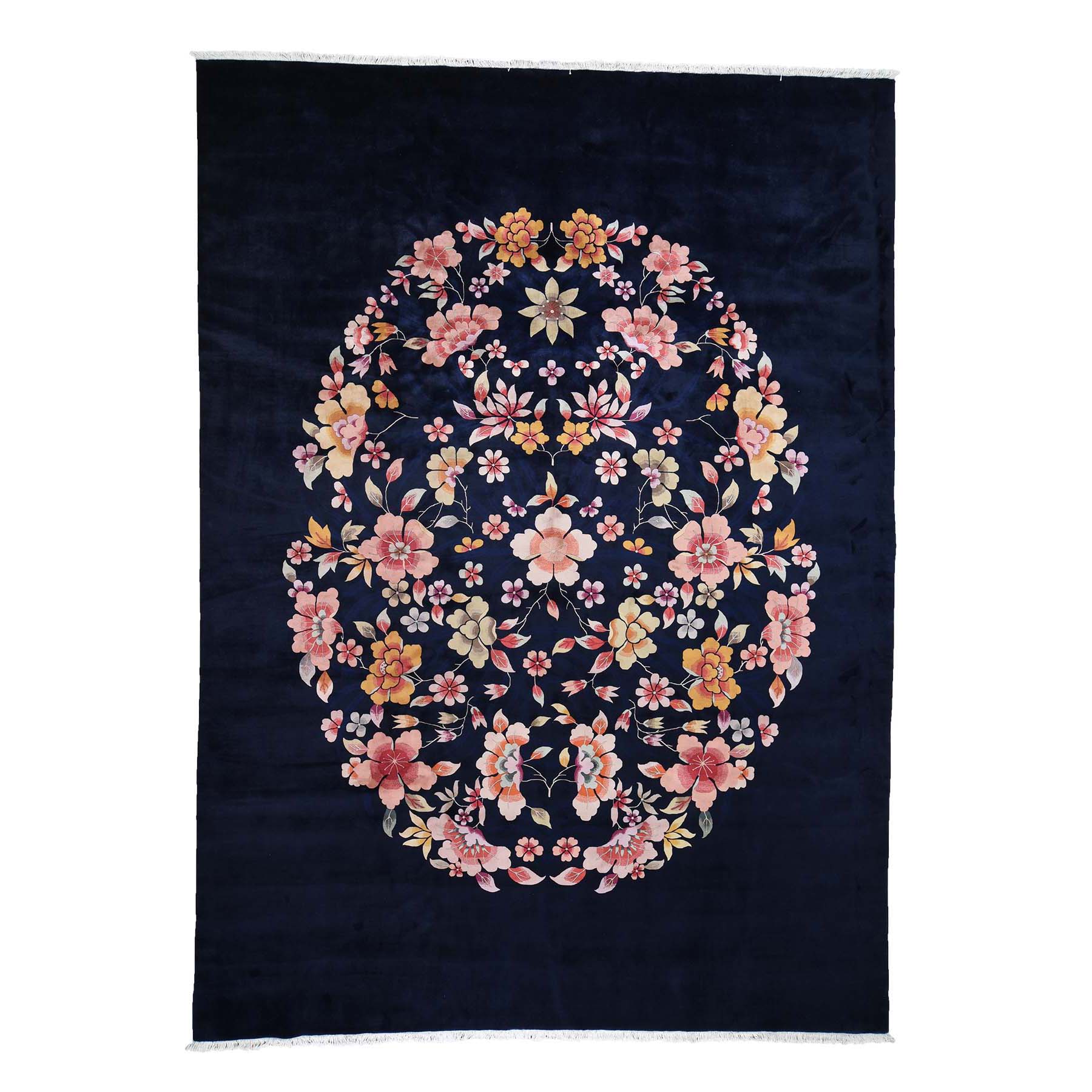 Chinoiserie started with imitations of what westerners perceived as “typical” Chinese and Japanese motifs like pagodas, and themes such as life in the imperial palace. Over time Chinoiserie motifs developed and began to include colorways and themes repackaged for western tastes and to reflect trends in western decorative arts. It’s a slight simplification, but the different design objectives between the west and the east – westerners prized design novelty and originality while Chinese valued tradition, skill, and scholarship – became complementary and harmonious design values. Nowhere were these objectives merged more creatively than in the exemplars of hand-knotted Art Deco era Chinese silk Chinoiserie “Nichols rugs”.

W.A.B. Nichols was a western owned rug company based in China at the turn of the 20thcentury. A multi-page company brochure from the 1930s describes the “Nichols Super Rugs” as “world famous” and “the most durable and beautiful product of the modern Chinese weavers art” with “designs, colors and workmanship placing them in a class by themselves”. The company described their ability to adapt Chinese motifs and reinterpret them via western design motifs. An example of this fusion is the “broken border” which merges Chinese motifs with the popular French design tradition where elements like plants or potted flowers break through the geometric border into the main field.

Similar to the broken border design is our indigo blue hand-knotted Nichols rug circa 1930s. Birds and butterflies cross a sky blue field while a darker almost tropical “night sky” border has more flowers and birds. Nichols promoted the “twelve tones of indigo blue” they used while reminding consumers indigo is “China’s national color”. Four flower urns sit on small stands at each corner of the rug. The design point of view makes them appear to tip forward as though they are about to spill their flowers across the field. The Nichols brochure says designs are “gleaned from old palace rugs, porcelains, pottery, temple decorations and bronzes, the old containing a mixture of the new thus modernizing the design and making the rug a thing of beauty for the western home.” The company employed skilled artists who were “always on the alert for something new” who were able to combine “the best elements of the western and Chinese designs into a harmoniously blended whole.” Art Deco is always in style, but finding affordable antiques from the era (early 1920s to mid 1930s) is increasingly difficult. At price per square foot, Nichols rugs remain extremely good value. In good condition they not only hold their value, but more often than not, accelerate in value. But if your budget doesn’t stretch to an original Nichols Super Rug, fear not, we stock new hand-knotted rugs in the Chinoiserie style updated for contemporary interiors. For example our hand-knotted contemporary Chinoiserie rug features a central oval field of vibrantly colored stylized flower contrasted against an almost-black indigo field. Rather than a broken border, this design features a distinct design elements that create a vibrant contrast of geometry and color. The pattern is stunning and while it is definitely Chinoiserie, the motif is updated for the 21st century with color choice and pattern elements.

Chinoiserie offered the promise of virtual travel when real travel to far-flung destinations was impossible for the majority of people. Fortunately even though travel has been democratized and there is no corner of the world left undiscovered, there are still new ways to experience Chinoiserie and incorporate the patterns in your home through the beauty of handmade rugs.